One of the main roles for cementing process is the borehole preservation. Among this cementing role is the stability of the borehole boundaries. In order to maintain the borehole margins, stability of the crossed rocks during drilling operation has to be established. Thus a detailed study of the mechanical properties (compressive strength, tensile strength and bonding strength) for the predicted traversed formations has to be realized. One of the main targets in our laboratory is the measurement of the cement properties used to maintain the drilled borehole in a stable state.

Therefore study of consolidation and, extending time of resistance as well as stresses and strains distribution prior to any rupture of the borehole boundaries are considered. All these considered parameters have to be accurate to any specific oilfield. In addition and, in order to organize the drilling program and particularly the types of bits which should be used for the different traversed formations, a detailed study of rock properties has to be achieved. Such procedure is not only used to define the efficient way of drilling as well as completion, but it is also applied to avoid technical problems which can occur during any drilling operation. However, cement properties are measured in this laboratory, such as cement slurry density and filtration, cement slurry thickening time, and hard-set cement compressive strength. 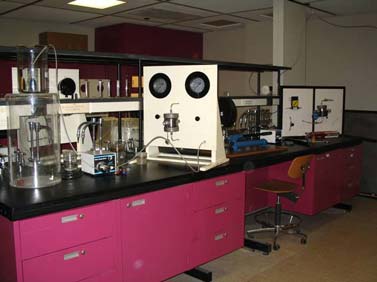 The site's content management through supervisor of College of Engineering
Do you face any technical issues on this page?